*Scroll down for Scientific Articles and News articles

Wearable Wireless Devices for the Whole Family: Connection and Convenience or Caution?

As the push for 5G mounts we are bombarded with compelling advertising campaigns to make us believe that we need more cell towers to provide infrastructure for more wireless devices and wearable devices, even for infants.  This is despite the lack of scientific research on safety of this technology and growing evidence of harm.

Although seemingly convenient, there are a host of privacy, security as well as health issues to consider in a wireless world.  This is largely a manufactured need. Industry admits that 5G is driven by supply, not demand.  The research on harmful effects of 5G has not kept up with industries “Race to 5G”, however, newer articles highlight the dangers. Nasim and Kim (2019) discuss the human exposure to wireless wearable devices that are placed close to the skin and show that “specific absorption rate (SAR) at 60 GHz can exceed the regulatory guidelines.”

Fitness Trackers: Are They Smart…or Distracting and Dangerous? 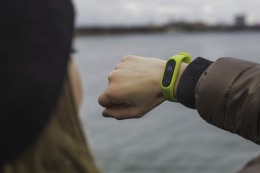 While many are rushing out to buy the latest upgrade of fitness trackers and “smart” watches, others are retiring them. Providing far more information than just the time, people are finding this technology is distracting, pulling them into a virtually connected world and disconnecting them from the real physical world. There are also real health and security concerns with their use.  While there are no scientific studies specifically on extremity wearable wireless devices and links to cancer or other adverse health effects, this technology does operate with wireless frequencies commonly used with bluetooth, Wi-Fi and 3G and 4G signals, demonstrated to be bioactive.  Many people in the FitBit Community are reporting dizziness, headaches and nausea when wearing the device. There is abundant research confirming that real risks do exists, including an increasingly recognized condition called electrosensitivity, with similar non-specific symptoms with exposure to wireless devices.  Recent and historic scientific research confirms biologic harm from non-ionizing radiation from wireless devices, especially with long term use, thus precaution is indicated. See 2018 NTP Study and  the MDSafeTech Scientific Literature section. https://mdsafetech.org

The CDC warns that these devices can also be distracting, especially when driving or using heavy equipment. In

Fitbit Recalled Due to Health Complaints

About 10,000 Fitbit Force users  complained to the Consumer Product Safety Commission about wrist rashes, blisters and burning sensations thus promoting a recall of all the Fitbit Force devices according to a CNN report. The company has attributed this to a nickel  or other chemical allergic reaction. These trackers are used to improve health .

While we are aware of the mounting evidence between cell phone use and brain cancer, few have made the connection between wearable fitness trackers and potential complications from the wireless radiation emitted. These devices are given to kids to monitor sleep and physical fitness.

In a Fox News report about wearable devices, obstetrician and gynecologist, Dr. Hugh Taylor of Yale University, warned that in pregnant women wireless watches would be emitting radiation close to a growing fetus. He stated, “My warning is that we should be particularly cautious in pregnant women, especially something such as a watch if you have your arm straight down or resting on your belly.”  Dr. De Kun Li’s  2017 robust prospective study, Exposure to Magnetic Field Non-Ionizing Radiation and the Risk of Miscarriage, also highlights the dangers of cumulative and increasing everyday wireless radiation exposures contributing to miscarriage.

The same holds true for male reproduction with review article by Adah (2018) and Kesari (2018)  cautioning against increased exposures to protect male fertility.

A 2015 article published in the New York Times,  The Health Concerns in Wearable Tech, simply questioned the wisdom of wearing a wireless gadget attached to your body all day and sometimes all night. Within 24 hours of the appearance of this article by Nick Bilton, the telecom industry lashed back in a series of 20 articles. This was noted in a blog, Wireless Empire Strikes Back, by Silicon-valley engineer Jeromy Johnson, noted for, among other things, his Ted Talk, Wireless Wake-up Call.  He notes that we can no longer assume our wireless technology is safe, especially with long term and near constant exposure. With the new PhoneGate scandal in the US and France, showing the FCC limits were exceeded with smart phones close to the body, why would we place these devices so close to us without assurance safety guidelines are met with long term independent studies that are based on biological, not just heat effects?

Security of wearable devices is a legitimate concern. Technology engineers have warned that they are easily hacked compromising health data and identity. The GPS tracking company Strava, uses satellite information to map the locations and travels of subscribers to the company’s fitness service, including those wearing Fitbit.  These have been put on an interactive map. US Servicemen who wore Fitbits with the mobile app were able to be tracked on base. The U.S. Military revised its rules after sensitive data was revealed.

There are also emerging privacy and security issues. If you have wearable devices, there are ways reduce exposure by turning the wireless connection off if not needed (or on airplane mode), avoid wearing the device at night or for long periods and downloading your information infrequently.

A new 2018 paper,  Fatal Collision: Are Wireless Headsets a Risk in Treating Patients?,   highlights the potential bodily  harm from wearing wireless headsets, augmented reality systems and glass-type eyewear. Physicians and other health care workers are also using wireless RF devices, similar to cell phones, around their necks for rapid communication. Specific research has not been done on these devices as they are within the FCC guidelines, however all of the research on long and short term non-thermal biological effects at exposures within or below the guidelines would apply.  Brain cancer, neurologic harm (memory, learning, behavior), eye pathology, reproductive damage and electrosensitivity are included as associated risks found in research.  See Also MDSafetech- Eye Effects- Scientific Literature

In a new paper Fernandez et al (2018) reveals that young eyes and brains absorb 2 to 5 fold more radiation than that of an adult. Dr. Fernandez advises precautions proposed by the American Academy of Pediatrics, that young children should not use cell phones. This study indicates virtual reality type devices should also not be used by children due to high absorption and exposure.  Adults should also beware

Absorption of wireless radiation in the child versus adult brain and eye from cell phone conversation or virtual reality (2018) Fernandez et al.

Baby Wearable Monitors: Economic benefit but what are the heath consequences?

The market for wearable wireless devices has never been better. An untapped but rising economic opportunity targets babies. Smart pacifiers, biometric- tracking onesies,  teethers with cell phones and Wi Fi enabled cribs to sooth and rock your baby to sleep, are all aimed for convenience. Apps can even be built in to remind parents to feed the child on a regular schedule.   “Smart” baby  cribs are designed to give parents more sleep at night, but are they harmful to the developing brain? Research indicates that precaution is needed with the use of these devices. Studies suggests that  if the parents removed their smart meters, put their cell phones on airplane mode and turned off the Wi Fi router at night everyone would enjoy a better sleep. 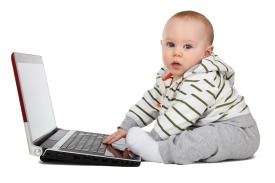 Below is a link to  a host of  new “Smart” devices designed to keep track of your baby every breath- from a distance.  Is this really “Smart” technology?  Much research is demonstrating biological harm from long term exposure to wireless devices, especially in close proximity to the skin. Cell phone manufacturers warn that cell phone devices should not be placed against the body. Tablets and laptop computers are supposed to be 20 cm away from the body according to Federal Communications Guidelines (FCC).  Is this technology becoming intrusive and disconnecting ourselves from our babies and children?  Should this radiofrequency technology be widespread given the overwhelming evidence of harm from exposure to this type of non-ionizing radiation?

The radiation was measured from a Fitbit Tracker. Although this is not a certified reading it does give some idea of the amount of radiation emitted, indicating concern for long term use.